In its ‘Guiding Principles for Core Strategies’ the RSES requires Local Authorities to have regard to the settlement hierarchy in the preparation of the Core Strategy.17 There is also a recognition that the implementation of the Growth Strategy of the NPF at a regional and county level will result in inconsistencies with existing plans, particularly with regard to the quantum of land zoned for residential use.

The RSES provides the following options18 to address the issue of excess residential lands:

There is also an acknowledgement that there are instances where there are settlements with long term development potential that are not being brought forward for development. Rather than being dependent on the release of these lands for residential development, the RSES indicates that Local Authorities should consider other suitable lands with better prospects for delivery in the short term whilst also pursuing the more strategic lands through an Active Land Management Strategy.

In identifying the residential land requirement for this Plan and addressing the issue of excess lands consideration will be given to both options set out above. An evaluation of all undeveloped residential lands in each settlement has been carried out. The prioritisation/phasing of residential lands will only be utilised in the larger settlements where population growth is to be concentrated i.e. Regional Growth Centre, Key Town, or Self-Sustaining Growth Towns and only where there are fundamental reasons which support the requirement to phase such lands.


It is proposed to include a reserve of residential lands that will not be available for development until after 20267 only in the following settlements:

Table 2.4: List of settlements where a ‘reserve’ of residential lands is to be retained

17 Section 4.3 of the RSES ‘Defining a Settlement Typology’

18 Section 4.3 of the RSES ‘Taking Account of Existing Plans’

The graph above sets out the projected growth in the County up to 20267 and confirms that the pattern of growth will be along a similar trajectory as that experienced between 2006-16.

As previously indicated, the absence of guidance at a national and regional level regarding projected household requirements and occupancy rates presents a significant challenge with regard to quantifying the total number of households and land required to meet the housing needs of the County during the Plan period.

For example, it is unclear as to whether or not it is anticipated that future occupancy rates will decline over the next decade following an increase between 2011-16. In addition it is difficult to quantify the additional housing required in the County to ‘catch up’ with demand.

This would equate to an annual average output of approximately 1,880 2,035 units per annum. This is not considered to be an unrealistic figure, particularly in the context of the anticipated housing requirements set out in the NPF and Rebuilding Ireland.27

Table 2.9: Projected household requirement in Meath up to 2026

Table 2.9: Projected household requirement in Meath up to 2027

One of the underlying principles of the growth strategy in the NPF and RSES is securing more compact development. This is a continuation of the policy approach set out in the National Spatial Strategy and the Regional Planning Guidelines where there was a requirement for a sequential approach to be taken to the delivery of housing with priority given to the regeneration of infill/brownfield sites.

There is a target in the NPF and RSES to deliver at least 30% of all new homes in towns outside of the cities to be located ‘within and close to the existing built up area’ of settlements.28

This Plan recognises the social and economic benefits of the redevelopment of brownfield lands, particularly in relation to urban regeneration, and will continue to support the delivery of compact growth and the regeneration of under-utilised sites in towns and villages throughout the County.

An analysis of the potential capacity of infill and brownfield lands zoned for residential, town centre, or mixed use developments in all settlements indicates that approximately 6,272 units could be delivered on these lands. This equates to 31% of the household allocation for the County. The development of these lands will make an important contribution to the creation of more sustainable communities in the County and will support the implementation of the national and regional policy objectives of creating more compact settlements.

2.10.4 Distribution of Population and Households in the County

The multi-faceted nature of settlement growth and the various socio-economic factors associated with the growth of towns and villages makes it extremely challenging to provide an exact figure for a population to grow to at a specific time. Rather than focusing on the population projection as a ‘target’ the figures provided in Table 2.11 should be regarded as a guide as to the level of growth anticipated in that settlement during the plan period. The emphasis will instead be on the delivery of the objectives of the NPF and RSES, and in particular the creation of balanced, sustainable growth.

It is acknowledged that due to various circumstances there are some settlements that may grow at a rate faster than anticipated and others which will develop at a slower rate. As part of the monitoring and implementation process of this Plan the Council will analyse settlement growth within the County, particularly following the publication of Census 2021 data data from the next census. This exercise will form a significant element of the formal 2 year statuory review.

Chapter 9 sets out the relevant policies and objectives in respect of residential development in rural nodes and the open countryside.

36 Following the adoption of this Plan it is intended to prepare a Local Area Plan for each of the following settlements: Navan, Dunboyne/Clonee, Ashbourne, Trim, Kells, Laytown/Bettystown/Mornington/Donacarney, Dunshaughlin, Duleek, Enfield, Stamullen and Ratoath. A Joint Local Area Plan for Maynooth is to be prepared with Kildare, a Joint Urban Plan is to be prepared for Drogheda. 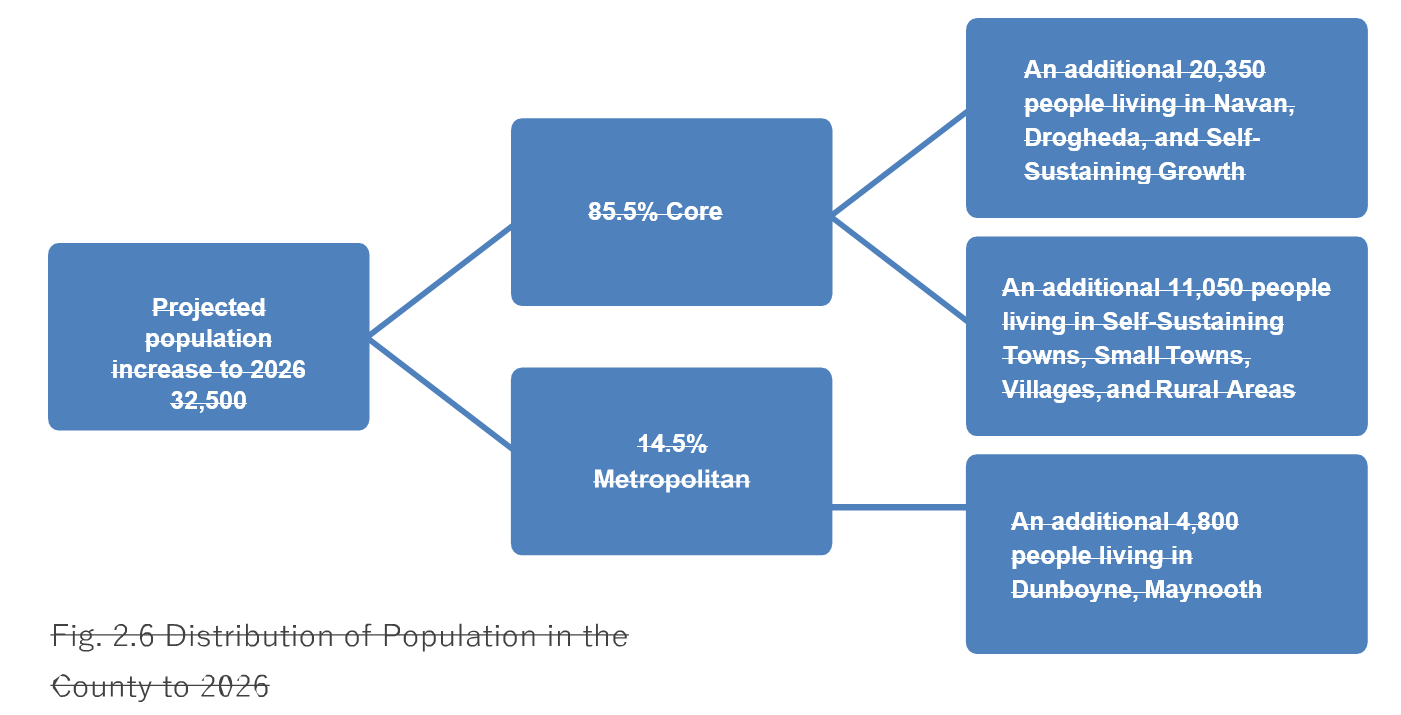 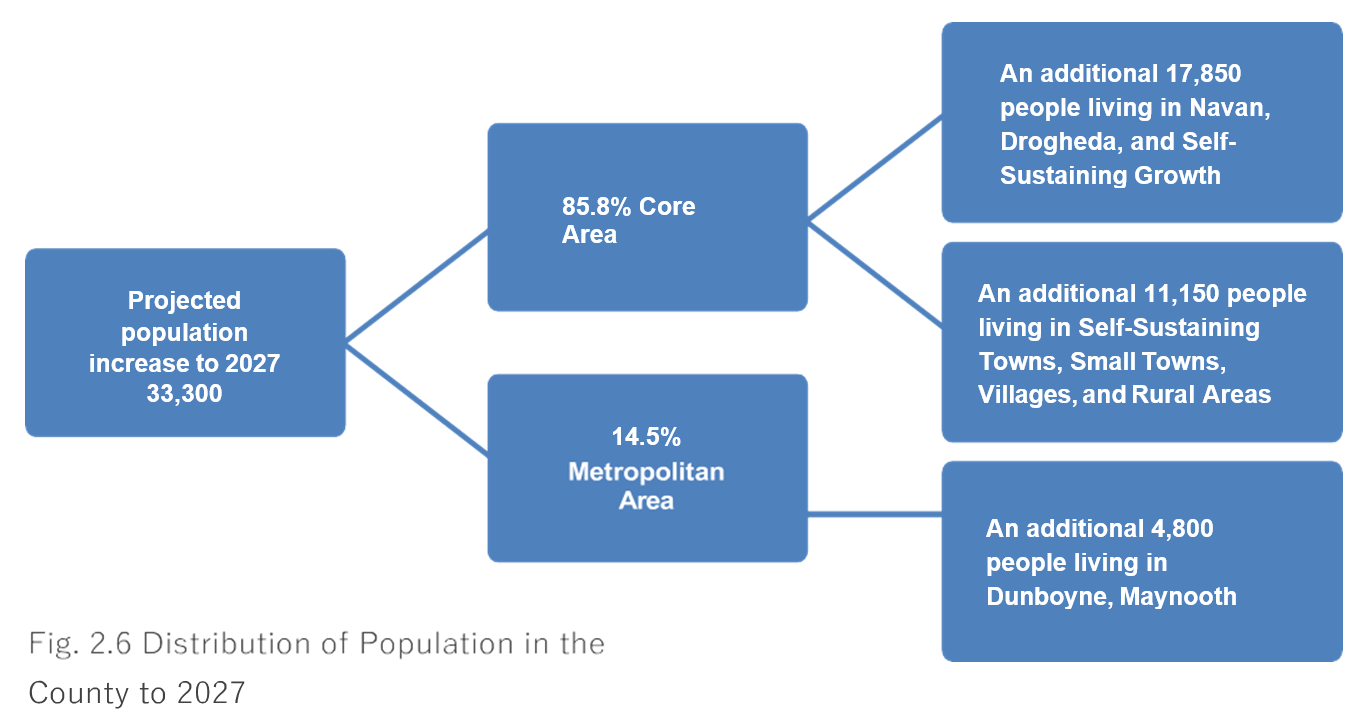 View graphs and filter submission data for this consultation